Switching To R32 From R410A: Why Manufacturers Are Switching Refrigerants

What is an AC refrigerant and why is it used?

Air conditioning, refrigeration and freezing technology are all powered by refrigerant — a compound typically found in a fluid or gaseous state. A refrigerant works by absorbing heat from the environment, which combined with other components like compressors and evaporators to create cool air.
What’s up gym in wambrechies, what’s up – (north) danabol ds 10 orange bleue castres (weight room / cardio training), castres (81100) – tarn.
Air conditioners contain refrigerant inside inner copper coils, as the refrigerant absorbs heat from inside, it transitions from its state as a gas, to a liquid. This liquid is sent outside, where a fan blows hot air over the coils and exhausts to the outside.

From there, the refrigerant cools and turns back into a gas. A fan then blows air over the cooled coils, resulting in cool air being blown out of the unit and throughout your home. This cycle is repeated over and again during the cooling process.

Types of refrigerants in ACs 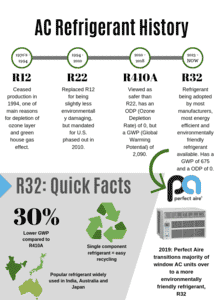 R22 is a Hydrochlorofluorocarbon (HCFCs) refrigerant that was slightly less environmentally damaging than R12, but was mandated for phase out in the U.S. in 2010 due to the Clean Air Act. R22 is expected to be completely phased out by 2020.

R410A is a hydrofluorocarbon (HFCs) refrigerant, that was viewed as safer for the environment than R22. It has a GWP (Global Warming Potential) of 2,090, meaning that if one kilogram is released into the atmosphere, it would have 2,090 times the impact of one kilogram of carbon.  That being said, R410A has an ODP (Ozone Depletion Potential) of 0.

R32 is also an HFC refrigerant that many air conditioning manufacturers are adopting for its performance in regards to the environment, energy consumption, efficiency and safety. Compared to R410A, R32 has a GWP of 675 — about 30% lower. Both refrigerants have an ODP of 0.

R32 is quickly becoming the refrigerant of choice for many AC manufacturers, including Perfect Aire. While there are many reasons for this switch, the main benefits of R32 are:

Is it possible to upgrade refrigerant in an existing unit?

Please note that it is not possible to transition an R410A refrigerant unit to an R32 unit. Refrigerants should only be handled by trained, qualified technicians. These experts can assist you in finding an R32 capable system.

Next
Back To All
Last
Related Posts

More Of What You Are Looking For

Back To All Posts